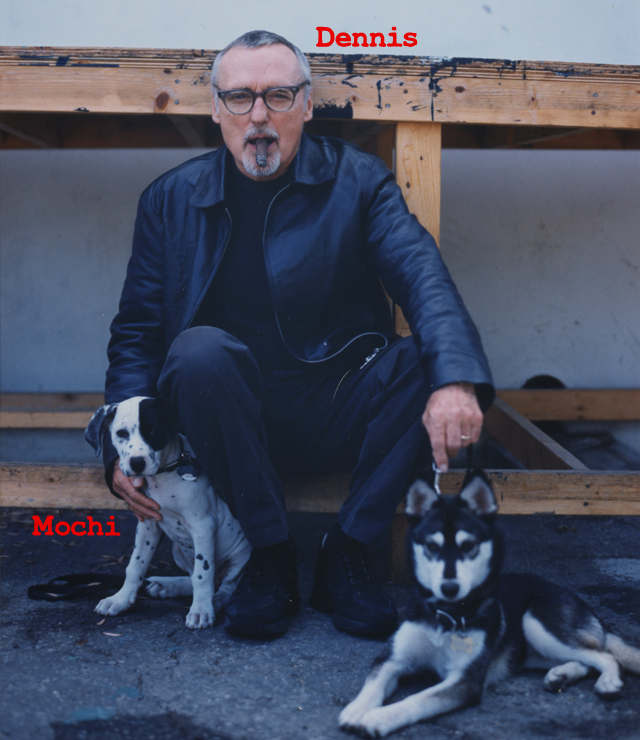 - Getting an Emmy Nomination before getting into films
- Telling Harry Cohn to 'go f*ck himself!'
- Influenced by Brando & Clift
- Testing for 'Giant'
- Hanging out with 'The King' Elvis Presley
- The naive Elvis
- On his mentor James Dean: "Until I met dean I thought I was the best young actor in the world, I really did"
- The first acting lesson from James Dean
- "Jimmy said, 'When you really have to cry you have to leave the room, that's real crying"
- James Dean advised Hopper not to study with lee Strasberg in New York
- "Dean was the most imaginitive actor I've ever seen"
- Where was Hopper when James Dean died?
- "Jimmy's suicidal death thing is all bullshit!"
- Trying to carry the torch after Dean passed away
- Fighting Universal after 'The Last Picture' won the Venice Film Festival
- Getting blackballed by Henry Hathaway & leaving Hollywood
- Hopper chose to take Joanne Woodward as his date, not Natalie Wood
- Close friendship with the Newmans
- Hathaway giving the OK for Hopper to work in Hollywood again. "Its not me, Duke doesn't like that method shit"
- Early Indy days working with Peter Fonda, Roger Corman, & Jack Nicholson


Multi-talented and unconventional actor/director regarded by many as one of the true "enfant terribles" of Hollywood who has led an amazing cinematic career for more than five decades, Dennis Hopper was born on May 17, 1936 in Dodge City, Kansas. The young Hopper expressed interest in acting from a young age and first appeared in a slew of 1950s television series, including "Medic" (1954), "Cheyenne" (1955) and "Sugarfoot" (1957). His first film role was in Johnny Guitar (1954), which was quickly followed by roles in Rebel Without a Cause (1955), Giant (1956) and Gunfight at the O.K. Corral (1957). Hopper actually became good friends with James Dean and was shattered when Dean was killed in a car crash on September 30, 1955.

Hopper portrayed a young Napoléon Bonaparte (!) in the star-spangled The Story of Mankind (1957) and regularly appeared on screen throughout the 1960s, often in rather undemanding parts, usually as a villain in westerns such as True Grit (1969) and Hang 'Em High (1968). However, in early 1969, Hopper, fellow actor Peter Fonda and writer Terry Southern, wrote a counterculture road movie script and managed to scrape together $400,000 in financial backing. Hopper directed the low-budget film, titled Easy Rider (1969), starring Fonda, Hopper and a young Jack Nicholson. The film was a phenomenal box-office success, appealing to the anti-establishment youth culture of the times. It changed the Hollywood landscape almost overnight and major studios all jumped onto the anti-establishment bandwagon, pumping out low-budget films about rebellious hippies, bikers, draft dodgers and pot smokers. However, Hopper's next directorial effort, The Last Movie (1971), was a critical and financial failure, and he has admitted that during the 1970s he was seriously abusing various substances, both legal and illegal, which led to a downturn in the quality of his work. He appeared in a sparse collection of European-produced films over the next eight years, before cropping up in a memorable performance as a pot-smoking photographer alongside Marlon Brando and Martin Sheen in Francis Ford Coppola's Vietnam War epic Apocalypse Now (1979). He also received acclaim for his work in both acting and direction for Out of the Blue (1980).

With these two notable efforts, the beginning of the 1980s saw a renaissance of interest by Hollywood in the talents of Dennis Hopper and exorcising the demons of drugs and alcohol via a rehabilitation program meant a return to invigorating and provoking performances. He was superb in Rumble Fish (1983), co-starred in the tepid spy thriller The Osterman Weekend (1983), played a groovy school teacher in My Science Project (1985), was a despicable and deranged drug dealer in River's Edge (1986) and, most memorably, electrified audiences as foul-mouthed Frank Booth in the eerie and erotic David Lynch film Blue Velvet (1986). Interestingly, the offbeat Hopper was selected in the early 1980s to provide the voice of "The StoryTeller" in the animated series of "Rabbit Ears" children's films based upon the works of Hans Christian Andersen!

Hopper returned to film direction in the late 1980s and was at the helm of the controversial gang film Colors (1988), which was well received by both critics and audiences. He was back in front of the cameras for roles in Super Mario Bros. (1993), got on the wrong side of gangster Christopher Walken in True Romance (1993), led police officer Keanu Reeves and bus passenger Sandra Bullock on a deadly ride in Speed (1994) and challenged gill-man Kevin Costner for world supremacy in Waterworld (1995). The enigmatic Hopper has continued to remain busy through the 1990s and into the new century with performances in The Night We Called It a Day (2003), The Keeper (2004) and Land of the Dead (2005).

As well as his acting/directing talents, Hopper was a skilled photographer and painter, having had his works displayed in galleries in both the United States and overseas. He was additionally a dedicated and knowledgeable collector of modern art and has one of the most extensive collections in the United States. Dennis Hopper died of prostate cancer on May 29, 2010, less than two weeks after his 74th birthday.