Robert Forster Interview Part 1
- Getting 'Jackie Brown'; From the worst job to the best job in the same year
- "I was dead in the water. No agent, no manager, no lawyer"
- "Quentin's dialogue was very human"
- Auditioning for 'Reservoir Dogs' & talking to Quentin
- "Stardom was not going to be my future, so being well thought of at the end was a good fallback strategy"
- Playing bad guys for 13 years after 'Delta Force'
- Working with Thomas Hayden Church in 'Divorce'
- "Could it be the part of the Bail Bondsmen?"
- Tarantino said "I hire anybody I want"
- Months before 'Jackie Brown' came out
- "I hope I see my dad again"
- Tarantino's kind gesture to Forster's father
- "My dad never gave up on me"
- Broadway debut in 1965 & being one of the last contract players for Fox
- Meeting John Huston for 'Reflections of a Golden Eye'
- Education from John Huston
- Facing the music
- Sobering lessons in life from playing tennis
- Joe Stein
- "Always do your excellent best & learn to accept what is"
- ROBERT FORSTER'S THREE STEP PROGRAM
- Two rules of money
- "Life is only once so you better make the best of it"

Robert Forster Interview Part 2
- Nerves & anticipation before "Jackie Brown" opened
- 'Diamond Men' opening after 9/11
- "Wow Donnie Wahlberg!"
- Memorable scenes in 'The Descendants'
- Meeting the girl in 'Bye Bye Birdie'
- Acting methods
- Marlon Brando Story
- "If they want me I'm not that hard to get"
- Passing on the original 'Twin Peaks'
- Robert Loggia
- "David Lynch is in a class of his own"
- Shooting 'Medium Cool' with Haskell Wexler
- 'Breaking Bad' & 'Better Call Saul'
- Playing an honest man
- 'Too Late'
- Quentin's perceptiveness casting Robert Forster in 'Jackie Brown'
- Quentin setting the mood on the set of 'Jackie Brown'
- High & Low moments
- "I created a job for myself"
- "Tell 'em the truth Bob!"

Academy Award® Nominee and “Grindhouse Giant” (according to the NY Times) Robert Forster is known for his solid work in films from the top to the bottom of the business.  Robert’s Oscar-nominated role of ‘Max Cherry’ in Quentin Tarantino’s JACKIE BROWN marked the beginning of what he calls the ‘third act’ of his career -- now spanning over five decades.

Robert has appeared in over 100 films. The old ones, starting in 1966, include REFLECTIONS IN A GOLDEN EYE, MEDIUM COOL, THE STALKING MOON, ALLIGATOR, VIGILANTE (the Blu-ray release of which earned him the moniker “Grindhouse Giant”), THE BLACK HOLE and STUNTS, and the TV series BANYON.  Then for 13 years he played villains – starting with DELTA FORCE (1985), ending with one of his all-time favorites, AMERICAN PERFEKT (1997).

Since his Oscar-nominated role of Max Cherry in JACKIE BROWN (1997) his films include upcoming AUTOMATA and SURVIVOR; OLYMPUS HAS FALLEN; Best Picture Nominee, THE DESCENDANTS; MIDDLE MEN; GHOSTS OF GIRLFRIENDS PAST; THICK AS THIEVES; LIKE MIKE; ME, MYSELF & IRENE; FIREWALL; LAKEBOAT and DIAMOND MEN; and TV series including upcoming BACKSTROM; LAST MAN STANDING; BREAKING BAD; INTRUDERS; ALCATRAZ; HEROES; HUFF!; KAREN SISCO and FASTLANE.

In addition to his work in film, television and theater, Robert records audio books, including the best-seller "Hit Man," and Elmore Leonard's "Mr. Paradise," and delivers his speaking program, INTERACTING, to a variety of groups – from acting classes to graduating classes; baggage handlers to CEOs; and once (he’s pleased to report) to a group of white-collar criminals in a detention facility. He developed this program during the self-termed "sliding second act" of his career. INTERACTING is like a stand-up act with a "Menu" of positive stories instead of jokes ... and a few jokes too. The stories are the lessons of his life and outline several guiding principles -- respect, responsibility, parenting and raising any job to the level of an art form. 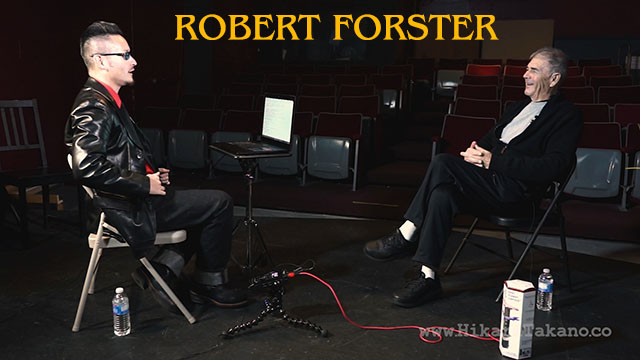