Brett Morgen Interview Part 1
- LA Kings fan
- "Cinema was always my refuge. I learned early that life couldn't compete with cinema"
- "Making movies didn't come easy"
- "Jim Hosney at Crossroads helped me realize that there were no rules in cinema. Anything was possible!"
- Brett Morgen's High School Senior Thesis film starring Jack Black & Maya Rudolph
- "My movies are about documentary film making"
- "My goal was not to un-earth new information on The Rolling Stones....but I am trying to tell the Stones story in a new experiential way"
- Phone call from Mick Jagger
- Interviewing Keith Richards
- "Mick knew what he didn't want more than what he wanted"
- The main conflict with Mick Jagger, the producer
- "Even directors play a parody of themselves on the set by dressing up in suits"
- "I found out that I connected with Kurt Cobain on so many ways"
- "This will be the first true Gen-X documentary"

Brett Morgen Interview Part 2
- "As the director I have to walk through every frame of the film with the editor, composer & the sound designer"
- "The color is one of the only tools I have to make my kind of films!"
- "I wanted "Crossfire Hurricane" to look like hodgepodge of colors....because that's what they were.....they were messy"
- Why "The Kid Stays in the Picture" broke new ground & still holds up as one of the most groundbreaking documentaries of all time
- "The Kid Stays in the Picture" was one of the first films to properly utilize After Effects in Photo Animation"
- "The Kid" looked seemless because it was carefully orchestrated & directed"
- "My movies are meant to be experiences"
- "Arnelle (Simpson) was my friend when O.J. Simpson was arrested"
- "When the O.J. Murder Case happened he wasn't 'O.J. - The Celebrity' to me. He was O.J. - Arnelle's dad"
- "I'm a fraud because I'm privileged to get subj ect matters that's hard to screw up"
- The Kurt Cobain film is going to completely blow people's minds!!"
- "Chicago 10" was my low point because it was not as successful as it needed to be"
- Getting through the hard times
- "I never lost faith in my abilities"

Brett Morgen Interview Part 3
- Best sports films
- "A film has to take artistic license"
- "what can I do that you can't do in a book?"
- In "The Kid Stays in the Picture" we wrote the script for 'cause & effect narrative'
- Hank Corwin's brilliant idea to illustrate Bob Evans' escape from the insane assylum
- "Chicago 10" was the hardest film I worked on"
- Brett Morgen's writing method
- "There's no room for Cinema Verite anymore because of reality television"
- "The best documentary filmmakers work in reality television"
- "I did a Cinema Verite film on "On the Ropes", but I will never do it again"
- "DSLR cameras has had a big impact on documentaries at large, but it hasn't impacted the kind of stuff I'm doing at all"
- "I've got a pretty good thing going right now making docs & directing commercials. There was a time when all I wanted to do was direct feature films"
- I've never been so creatively challenged than putting together the 'Kurt Cobain film' right now"
- The best documentary filmmaking happening in the world right now is the Anthony Bourdain Show!"
- "I don't know how other filmmakers handle multiple projects. I'm all about 'Intensive Immersion' when I'm making a film"
- Happy Accidents
- "There was a sense of discovery every day on the Cobain film!"
- "I couldn't be more challenged than working on the 'Kurt Cobain film'. Working on "star Wars" would be like walking in the park compared to the Cobain film"

Brett Morgen Interview Part 4
- Watching "The Kid Stays in the Picture" inspired me (Hikari) to learn editing
- "I've come to terms with the fact that "The Kid Stays in the Picture" could be the greatest film I ever did"
- "Bob Evans is totally unique! Bob could read the phone book & it would be electric!"
- "Errol Morris should be considered our greatest National Treasure in film!"
- "No filmmaker has re-invented the language of cinema more times than Errol in the 20th century"
- "David O. Russell nailed "The Fighter", but I hated "American Hustle!"
- "Flirting with Disaster was a masterpiece!"
- "If cinema ended after seeing "Seven Years a Slave" I would've been okay with it"
- "Seven Years a Slave" is one of the most important films ever made. But where does Steve McQueen go from there?"
- "Wes Anderson keeps making the same film"
- "P.T. Anderson is the greatest contemporary filmmaker alive! That guy's on another level"
- "I can't get emotionally invested in Quentin Tarantino film"
- "Quentin is the ultimate Post Modernism filmmaker"
- "Something that Quentin said once really resonated with me"
- "Any filmmaker going out there balls out should be celebrated"
- "Woody Allen consciously challenges new territory, and that is HEROIC!"
- Brett Morgen's advice to young filmmakers 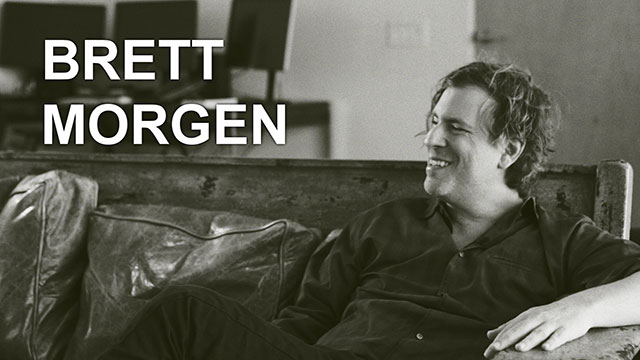 He is also a prolific commercial director who has directed over 150 spots for companies as diverse as GE, Nike, Dominos, ESPN, HSBC, and Marlboro.
Morgen majored in American Mythology at Hampshire College and attended NYU’s Tisch School of the Arts where he received an MFA in film in 1999. His thesis film, ON THE ROPES (1999), premiered at the 1999 Sundance Film Festival, where it received the Special Jury Award. The film went on to win several awards and honors including an Academy Award nomination for Best Documentary of 1999, the 1999 Directors’ Guild of America Award for Outstanding Direction in a Documentary, the International Documentary Association award for Best Film of the year, and an Independent Spirit Award nomination. It was one of the most critically acclaimed films of the year.

His next film, THE KID STAYS IN THE PICTURE, became a world-wide sensation when it premiered at the Cannes film festival in 2002. Morgen wrote, produced, and directed the adaptation of Bob Evan’s infamous memoirs. It was named one of the best films of 2002 by Entertainment Weekly and over 50 publications. It was also selected as Best Documentary of 2002 by the Boston Film Critics, Seattle Film Critics, Washington DC film critics and the 2002 Golden Satelite Award for Best Documentary. It was released by Focus Features in the States.

In 2007 Morgen released CHICAGO 10, which was selected to be the opening film at the 2007 Sundance Film Festival. Morgen wrote, directed, and produced the film that was released by Roadside Attractions and distributed by Paramount Home Video. The film received several awards and honors including Emmy, WGA, and ACE nominations. It is considered to be one of the first animated documentaries of it’s kind.

Morgen has created and executive produced several television series and events. In 2008, he won his first Peabody Award for the Sundance Channel series NIMROD NATION. The film was hailed as one of the best series of 2008 by the Los Angeles Times and the Television Critics Association.

In 2010, Morgen directed and produced JUNE 17, 1994 as part of ESPN’s 30 For 30 series. Morgen and the film received two Emmy nominations as well as a series Peabody Award.

Morgen’s most recent film, the Rolling Stones documentary CROSSFIRE HURRICANE was released in the fall of 2012. It had its broadcast premiere on HBO in 2013.

Morgen's next film is the much anticipated documentary on the late Kurt Cobain scheduled to be released in early 2015.