Anthony Lapaglia Interview Part 1
- Early Days in New York City
- The Next One from Australia
- Mel Gibson
- Paul Hogan
- An Aussie from Brooklyn?
- Finding a way in from the back door, or the side door
- Art still mattered in the early 80's
- Advice to young actors
- Theatre
- The Brilliance of Joaquin Phoenix


Anthony Lapaglia Interview Part 2
- Turning Point & Significant Influence
- "I enjoyed the early difficulties. There was a freedom in it. I've enjoyed it less the more successful I became"
- "I never took rejection personally"
- "Casting people want you to be the ONE"
- Comparative Shopping
- How Lapaglia's soccer career prepared him for show business
- 'Doing good work' means what?
- "I never doubted myself until recently.....It brought back humility"


Anthony Lapaglia Interview Part 3
- The Grand Slam of Acting Awards
- Are awards impotant?
- "None of my award wins had a forward progression to my career"
- The largess of Tom Cruise
- "How many cars and planes do you need?"
- "Sometimes you have to take a job for the money. But money never motivated me. It's all gravy"
- "Making small movies cost me money"
- Work ethic


Anthony Lapaglia Interview Part 4
- "Acting Can't Be Taught. It is a Gift"
- "The business of being a movie star is just as legitimate as being an extremely gifted actor"
- "I never thought I'll see the day someone like Marty Scorcese was told if he didn't take a certain actor the movie's not going to be made!"
- The next De Niro
- Seconds between 'Action' & 'Cut'
- Eye for detail & rituals in soccer
- Getting over the stigma of going from movies to television
- "Most of my work is from repeat business, or jobs I found"
- "Agents get 10%, you get 90%, who's got the responsibility to do more work?"


Anthony Lapaglia Interview Part 5
- Financial upside to doing "Without A Trace"
- "It's been a tough transition to not constantly be looking for work"
- "I told my daughter that she can't act professionally until she's 18"
- Mentoring young Aussies actors?
- Directing
- "Lantana"
- "What Ray Lawrence taught me about the importance of inclusion on a movie"
- "You are fucking with my process!"


Anthony Lapaglia Interview Part 6
- "Talking about a role you didn't do is a dis to the other actor"
- Setting the record straight on Lapaglia's involvement with "The Sopranos"
- Picking roles
- Pag's best work
- "Bill Murray's my hero!"
- "It never occurred to me there was any quitting involved"
- "If I walk out with nothing from this business it's all been a good experience. I've had a nice run"
- "Martin Landau is an example of someone who has learned to adapt to his environment. AND he's still doing it!"
- Final Words 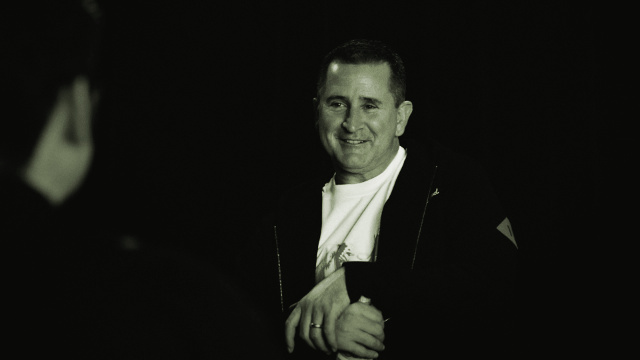 Anthony M. LaPaglia was on born 31 January 1959 in Adelaide, South Australia, the son of Maria Johannes, and Gedio "Eddie" LaPaglia, an auto mechanic and car dealer. LaPaglia's mother was Dutch and his Italian father immigrated from Bovalino, Calabria at the age of eighteen. His younger brother, Jonathan LaPaglia, is also an actor, and his other brother, Michael, is a car wholesaler. LaPaglia attended Rostrevor College.
LaPaglia first began his venture into the world of dramatic art in his late teens. He enrolled at the South Australian Castings Agency, more commonly referred to as "S.A. Castings". Rather than completing the two and half year course (plus quarter year boot camp/trial period) offered by "S.A. Castings", LaPaglia completed one and half years of the course, and with one year still to complete he left Adelaide and headed to New York.
LaPaglia's credits include the films "Innocent Blood", "The Client", "Looking for Alibrandi", "Summer of Sam", "So I Married an Axe Murderer", "Empire Records", and the critically-acclaimed "Lantana". LaPaglia also appeared in nine episodes of the sitcom Frasier, including the series finale, playing Daphne Moon's brother Simon. The role won him an Emmy Award for Outstanding Guest Actor in a Comedy Series. He also appeared uncredited in the film Analyze That playing an actor, Anthony Bella, who appeared in the TV show-within-a-film Little Caesar. LaPaglia also played the role of Jimmy Wyler, the lead during the second and final season of the television program Murder One. LaPaglia appeared in the Australian political thriller Balibo, about the killing of the five Australian journalists in the town of the same name in East Timor in 1975. LaPaglia played the part of Roger East, another Australian journalist, who went to investigate the deaths of the newsmen, only to be killed the day after the Indonesian invasion.
In 2002, LaPaglia co-starred as a fire captain opposite Sigourney Weaver in the The Guys, a film about New York firemen who died in the World Trade Center. He also played the role onstage, rotating with Bill Murray and others. “We did it as a tribute to the men,” said LaPaglia. “I’ve been so lucky to do it, to be part of this experience. But I can’t go back to that morning or watch the video. It’s too painful."
LaPaglia is perhaps best known for his role as FBI agent Jack Malone on the CBS hit series "Without a Trace" for which he won the Golden Globe Award for Best Actor in a Television Series Drama. In addition to leading the cast of Without a Trace, LaPaglia co-wrote an episode titled "Deep Water" with Byron Belasco, the show's usual writer.
On Broadway, Lapaglia starred in the Tennessee Williams revival of "The Rose Tatoo" with Mercedes Ruehl in 1994. In 1997-98, Lapaglia starred in the Arthur Miller revival of "A View From A Bridge", and won the Tony Award for Best Actor. Most recently, Lapaglia co-starred in Stanley Tucci's revival of "Lend Me A Tenor". He felt unsure and uncomfortable, despite Stanley Tucci's very supportive direction, in the genre of farce. Lapaglia said of his experience, (in this interview) "It was a much needed kick in the ass! It was a humbling experience."
In the 1980s, LaPaglia was a goalkeeper in the National Soccer League, playing for Adelaide City and West Adelaide. LaPaglia is now part owner of A-League club Sydney FC, and has been flying from California to Sydney to attend their matches since their inception in 2005. He was the narrator and executive producer of The Away Game, a critically-acclaimed television documentary exploring the experiences of Australian footballers in Europe.
LaPaglia underwent a hip replacement in the summer of 2004, a result of his days playing football. He fully recovered and even played with some amateur clubs in California. But he recently underwent hip replacement surgery for the other side. He mostly played with Hollywood United, an amateur organization of which he is club president, with other luminaries such as Frank Leboeuf, Steve Jones (of the Sex Pistols) and Vinnie Jones (who went on to form his own Hollywood club).
LaPaglia has a minority shareholding in the International Goalkeepers Academy. The Academy was founded and is operated by James Fraser, who represented the Australian national team leading up to the 1974 FIFA World Cup.
LaPaglia currently lives in Los Angeles, California. He has said that he adopted an American accent to help him get acting work after moving to America, and has now lost his Australian accent completely. However, he is still capable of performing a flawless Australian accent in later roles in Australian movies such as "Lantana" and "Balibo".
LaPaglia's married to actress Gia Carides("Strictly Ballroom"), whom he met at a party. The two starred in the 1994 Australian movie "Lucky Break" and married in 1998. They have one daughter, Bridget.